The project « EU FUTURE: COMMON GOALS, COMMON OPPORTUNITIES »was funded with the support of the European Union under the Programme “Europe for Citizens”

Applicable to the Strand 2 – Measure 2.1″Town-Twinning”

Short description:
The main purpose of the program was to bring together delegations from town-twinning localities of Cristuru Secuiesc and to help the participants to acquire through diverse types of activities relevant and realistic information about the functioning, positive results and problematics of the European Union. An important aim of the meeting was to bring together people for getting to know and count achievements of the EU on local, even general level, but also with the revival the common history of the European community, to give them opportunity for presenting images with moments of history being in connection with the establishment and evolution of the EU, for discussing issues the EU, the future of the EU in the prism of present problematic, faces in times of crisis (COVID-19 pandemic, after Brexit times, etc.), for understanding the euroskepticism, exclusion manifested towards migrants, for helping to find solutions for these problems and therefore to get aware of the importance of becoming active European citizens, to encourage the involvement in the cultural, social, educational life of the EU in order to make people aware that with small steps they can influence their future and the perspectives of the EU, for sharing their cultural values (culinary, folkloric, etc.) in order to preserving the multiculturalism of Europe, and for discussing the future of the community and for establishing mutual cooperation.

The day of 26th of July, 2021 was dedicated to reception of smaller delegations, greetings and presentation of the Program for European Citizens, the Twinning sub-program and the program of the event, coordination of the tasks of the representatives of the received delegations during the project, joint preparation of the scenario of round table discussions. In the afternoon, there were two meetings, on the one hand, presenting molinos, posters and panels about the political changes and events of the last years and decades, the historical moments of joining the EU, and campaigns. The exhibition is the Hungarian representative of Miklós Bánó to the project participants arriving for the city days, which was also colored by clarinet tracks. The event was moderated and presented by historical attorney Attila Györgyi, a local government representative and private collector, who also mentioned the responsibilities and tasks of political leaders and European minority issues. After the presentation of the valuable collection and the historical review, they shared their experiences of those present in an informal professional discussion. This was followed by project participants from another target group. The difficulties caused by the pandemic and their effects on education were assessed and analyzed at the teachers’ reception, as well as discussions on cross-border schools and twinned settlements, joint programs, opportunities, and a forum for the advancement of children in the EU.

The day of 27th of July, 2021. On the second day of the city day events, the main role was played by the arts and the display of our living spaces and regions. The opening of the exhibition of the works of the painting creative camp took place and opened on that day. The works presented at the exhibition faithfully reflected the landscapes, places and life situations that are presenting in Szeklerland, but at the same time in many parts of which the homeland people could also find points of connection. Parallels were drawn and similarities were listed by those present between the “here and there”, “then and far” worlds, lives, countries and parts of the country. Through the activity, participants became aware of their common historical and literary values, recognizing the importance of their own and the European community’s cultural treasures, and thus the preservation of their national identity and multiculturalism. After the afternoon program, they were waiting for those who were interested in a garden cinema. In addition to the pleasant, historically filled outdoor location and the experience of garden cinema, the participants were able to gain an insight in to the everyday life of Hungary in the war.

The day of 28th of July, 2021 was dedicated to youth and sport. The programs continued with student events, youth activities and sports competitions on Wednesday. The young people consulted on various current topics and issues affecting students, showed their creativity in youth competitions, voiced their ideas and learned from each other’s experiences and from the invited moderators and organizational leaders. The activities aim to get the younger generation to get to know the wider community of which they are a part. In their case, game-based sessions are most effective. At the same time, the day was made exciting and dynamic by the duathlon and triathlon competitions, where the interest was beyond imagination: running, cycling, swimming children, adults, young people, the elderly, families, companies also entered a sporting event promoting and promoting a healthy lifestyle.

The day of 29th of July, 2021. On Thursday, the events continued with programs and activities aimed for students, and a series of programs organized around the memory of the poet Sándor Petőfi. At the same time, larger foreign delegations were received. Among the topics of the student conference were the better cooperation between young people and official bodies, local governments, municipal, city and county administrative institutions, and the need to involve young people’s innovative ideas in the management of the settlement. Educating and encouraging, be active European citizens was primarily aimed at much of the programs organized for youth actors. The local youth organization (ATA) was set up with a variety of playful activities for young people to learn about EU funding opportunities, volunteering programs, opportunities in non-formal education and personal development, and dissected the benefits of social media during a roundtable discussion, the present of freedom of expression in the EU. The revival of our historical and local literary culture, Petőfi’scult, was manifested in the traditional bicycle pilgrimage and sports championships named after our famous poet. In the mean time, the groups from the foreign twinning were received by the organization.

The day of 30th of July, 2021 was dedicated to interculturality. The most joy full day of the series of events and our project was undoubtedly Friday, which began with a solemn flag-raising and singing the Örömóda/the song, Ode to Joy. The official anthem of the European Union speaks without words, in the universal language of music, about the European ideals of freedom, peace and solidarity, expressing an idealistic worldview emphasizing brotherhood between people. It was also important for us to connect our events to these ideas, to do for our relations, to strengthen strong, active European citizenship. Along these themes and goals, at the solemn municipal meeting, the present heads of delegation evaluated the co-operations so far and discussed the establishment of further effective partnerships, accompanied by a cultural program, the distinguished persons of the organizing settlement were honored. Through the program element, the public also deepened the topic of the concept of euroskepticism, understanding the reasons for the emergence and spread of these trends. In addition, participants became aware of what it would mean for citizens to lose the EU. In parallel with the meeting, the young people and students also continued their programs: round table discussions, lectures, deliberations took place in the ATA tent. It was colored by a first aid demonstration, training, ecumenical worship, a ceremonial parade, a mayor’s greeting and craft fair, and then a series of cultural performances completed the day. Performers from foreign delegations and local, regional singers and dancers presented their productions on stage.

The day of 31th of July, 2021. On Saturday our project was also busy, diverse and varied. The Petőfi marathon was the first memorial run, where all the participants were running for the same goal: the intertwining of our common culture, literature, traditions, emphasizing the importance of cross-border thinking and action, charitable goals, noble affairs, and the will to do things together. The cooking competition and wine competition were based on similar identical features and the beauties of diversity: everyone felt the same flavor, the same taste, the taste of community power at the competition of Hungarian dishes popular throughout Europe and the competition of well-made grape juices. Meanwhile, the children raged cloudlessly in the “corner” of the KID Zone, bathing in foam, crafts, creating, singing, dancing. The most touching and uplifting part of the series was the Néptánc-Gála (folk dance gala) and the commemoration of Petőfi’s death. Important messages, heartfelt speeches and memories, recalls of historical moments at the most important point of the cross-country scenes of the memorial, in the Gyárfás Garden. Also after the commemoration the participant leaders discussed the present problems, like the refugee crisis, its causes, its impact on the European community, and to develop a sense of solidarity and tolerance towards immigrants. The revival of our folk culture and uniqueness, Szekler and Hungarian, Roma and Romanian traditions, was fulfilled at the gala of folkdance and folk court: the audience appreciated the performing ensembles and guests with several applause. And the light music concerts and fireworks were able to put appoint on the “i” despite the sudden storm, persistent and boundless good humor was present until the last minute of the event.

The day of 1st of August, 2021 was dedicated to project ending and to make conclusions. On the closing day of the busy week, those whom were wishing to relax and recharge could take part in worship services and a pleasant music-playful unloading fair. Only the summary meetings of the delegations, the results of the project, the success of the meeting, the actual closing chord took place, where the aim was to plan further collaborations and joint projects and to fulfill the promise of continuation, hoping for a meeting as soon as possible. Through the the whole project and meeting the town-twinning delegations, settlements got to know each other better, found common ground in the process of settlement development, were inspired by each other’s projects, came up with ideas for further development of these applications, became aware of the positive benefits of joining the European Union, got to know each other’s main values. 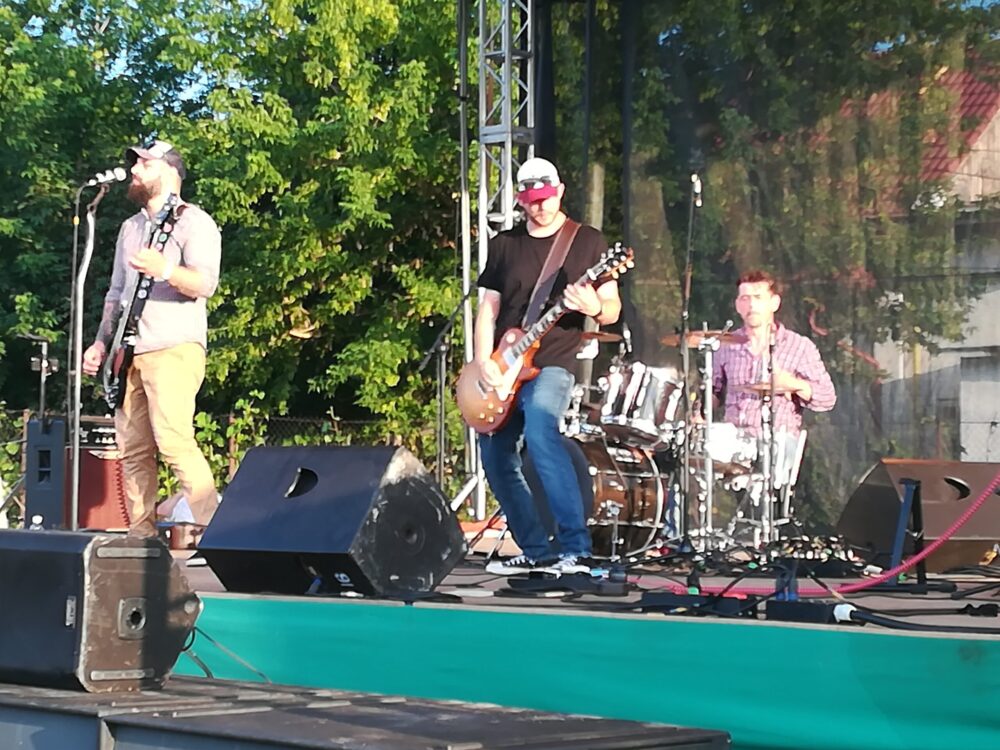 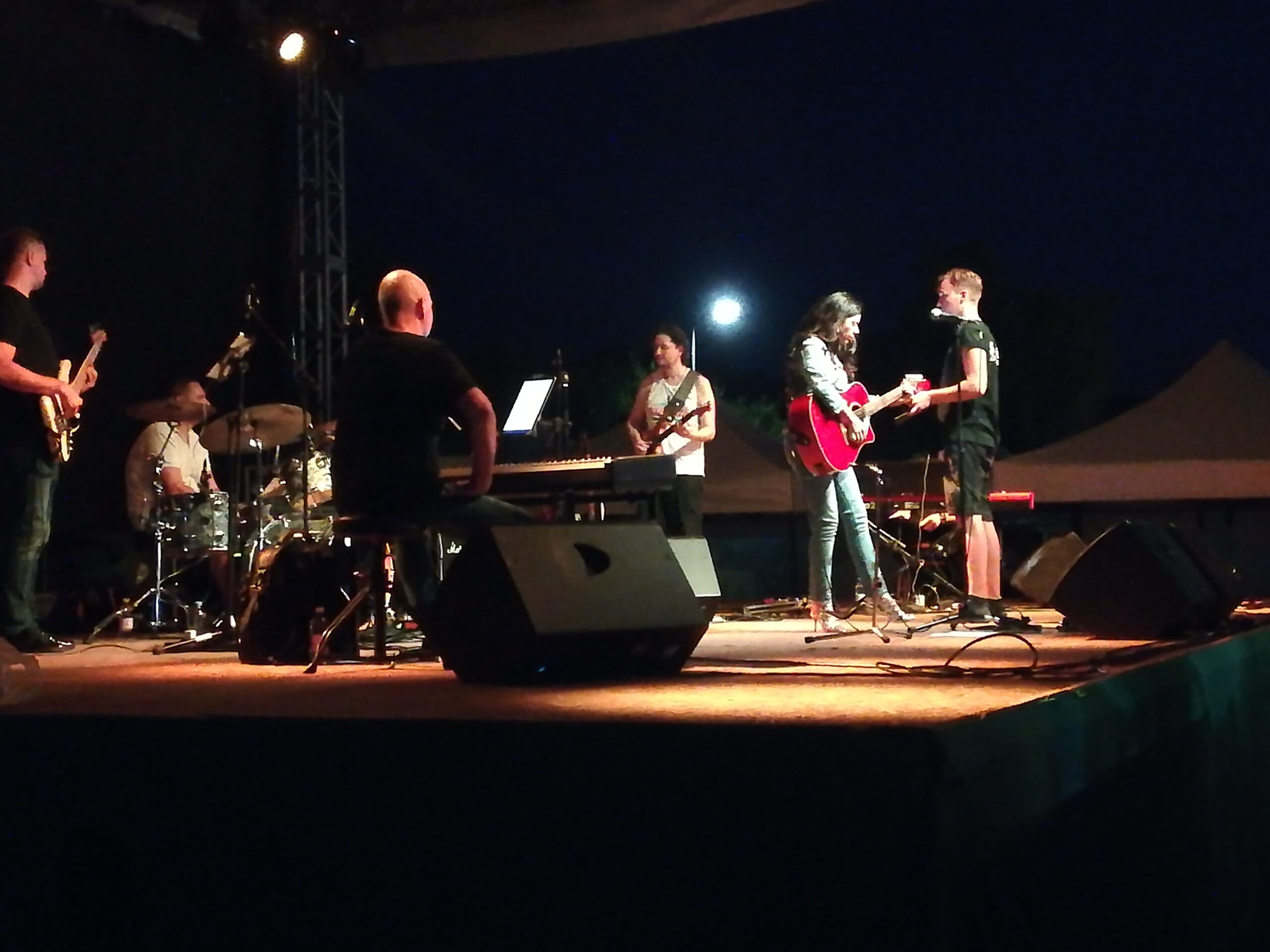 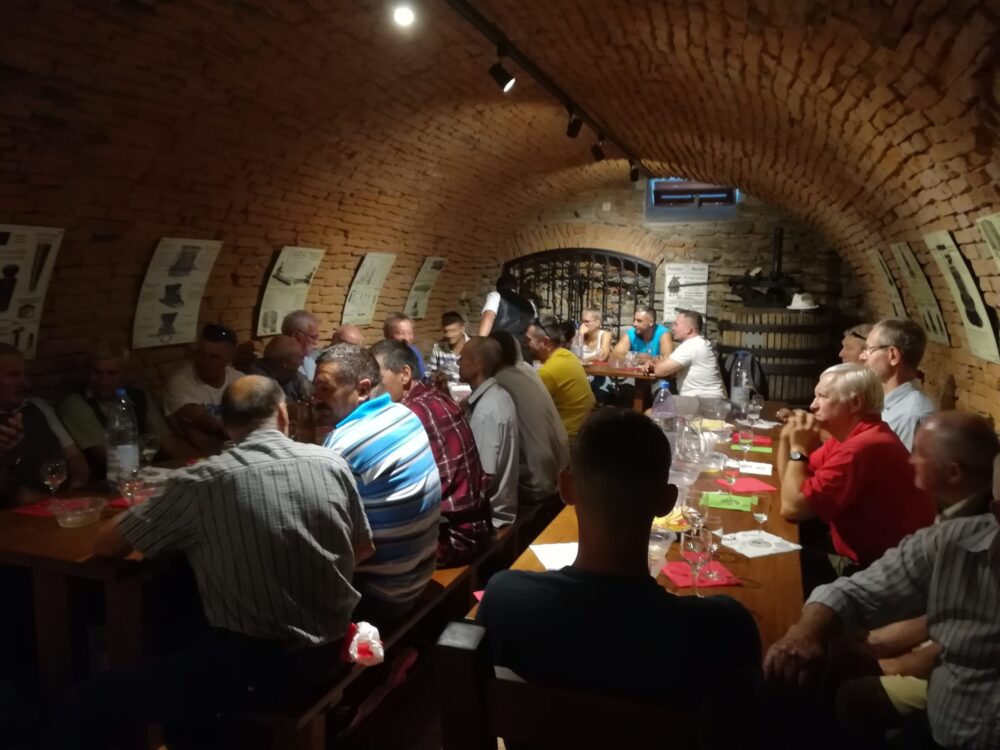 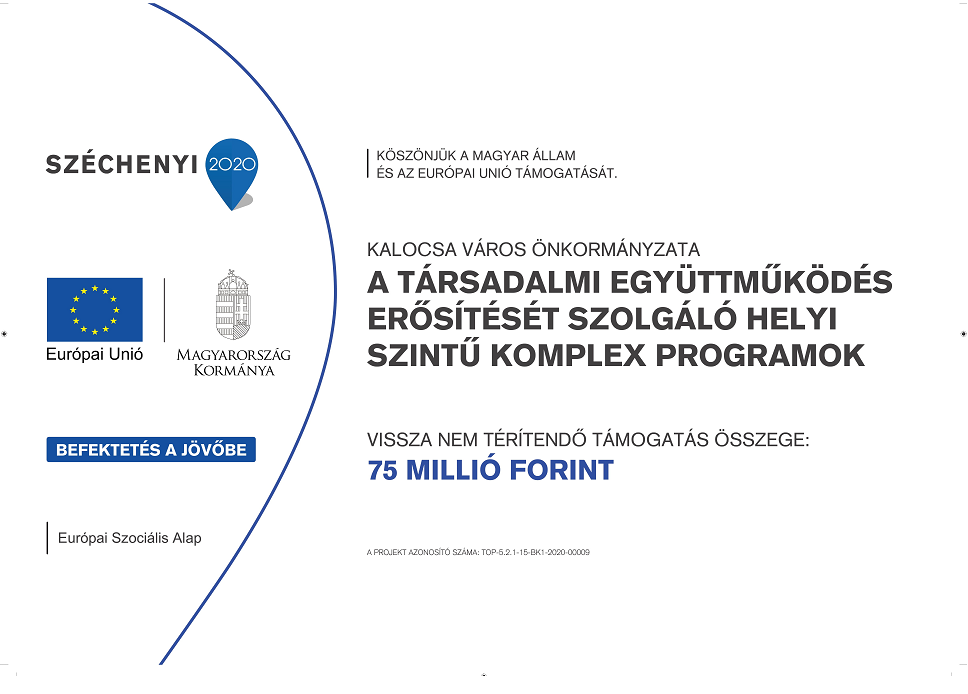 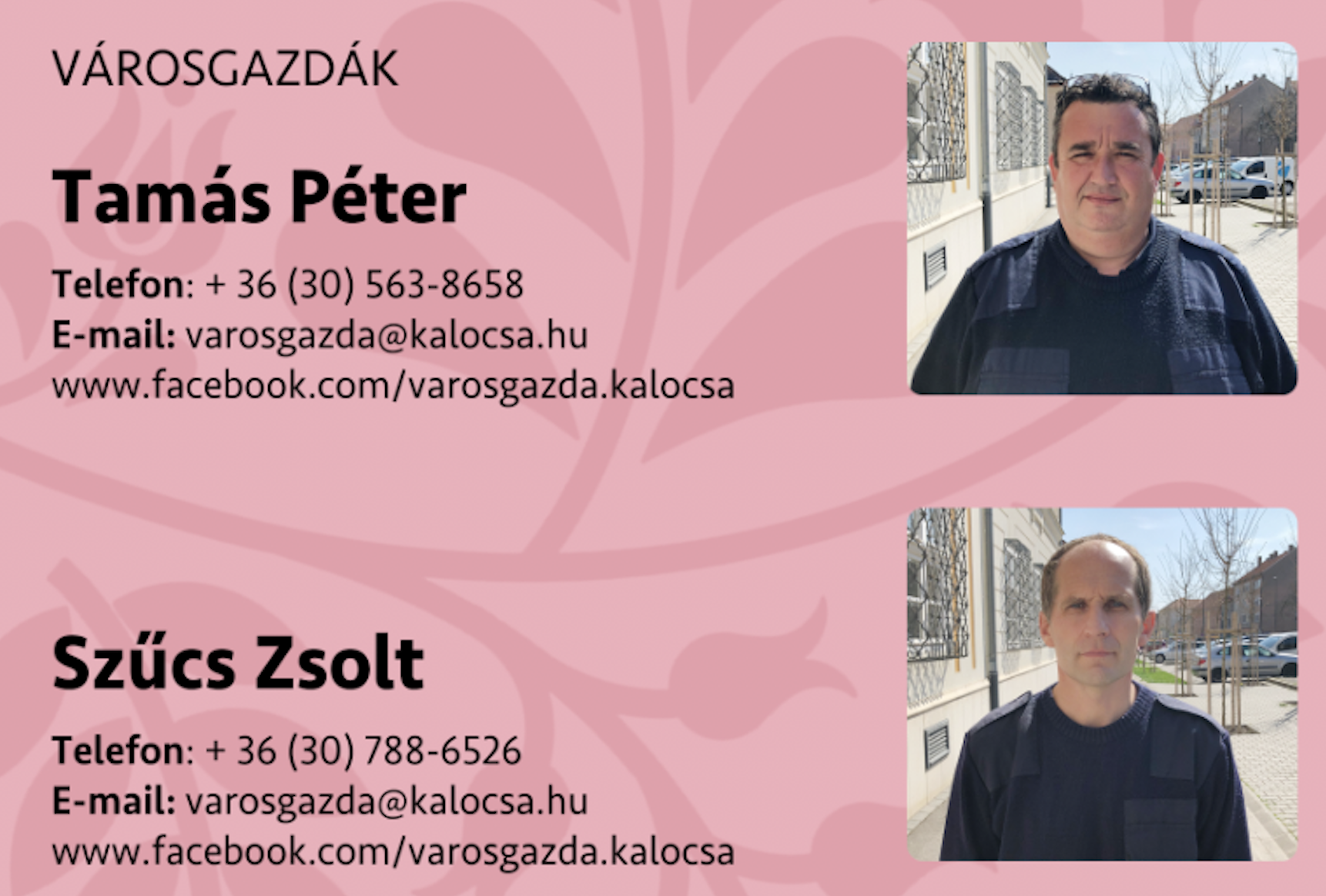